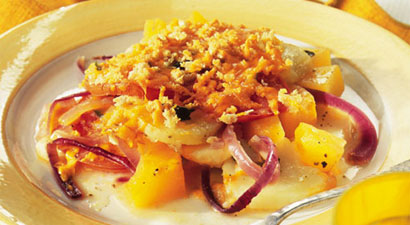 Image and recipe from rd.com

"Gratin" gets its name from the delicious crispy crunch of cheese on top. It's named after the "upper crust" in France at the time it was invented. This gratin combines that delicious cheese crust with the fall flavors of pumpkins and apple cider. It creates a great flavor combination that warms your heart!

2. In a large saucepan, combine pumpkin, cider, rosemary, and broth. Bring to a boil and simmer for 15 minutes. Add onion and cook for 10 more minutes. Add salt and pepper to taste.

4. Spoon cooked pumpkin on top, adding all of the cooking liquid. Top with the remaining potatoes, tomatoes, and oregano. Mix remaining cheese with bread crumbs and sprinkle that mixture on top.

That's it! Enjoy! Let us know what you think!